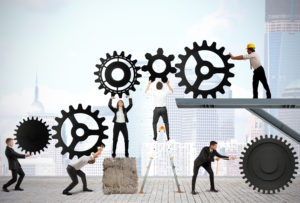 The Contract Management Team in a local Council is responsible for preparing contracts with suppliers and managing risk associated with these contracts.  Results from this team have previously been positive, due to the  dedication of the individual team members.  However, there is a growing sense that members are operating as individuals,  rather than as a team.  Recently this has caused problems, with some costly errors.  Relationships have also become strained, with some signs of a divide between the longer term members and the newer arrivals.  The manager is frustrated because he knows the value each person in the team has to offer.  He is sure that the team is capable of improving, and really wants to help with this, but he doesn’t have a clear idea of how to begin.

The above situation is the norm for many, many teams.

No matter how well individuals perform, impressive results for organisations will only come when teams are  effective.  The best teams are clear on goals, members understand each other’s roles, communication is regular and honest, and there is mutual trust and support.

Some teams successfully work together and achieve great results, However, too many never reach their full potential because they fall short on the above factors.

Elephant Capability can work with work teams to help them become more effective by diagnosing team effectiveness, engaging the team in a process to identify improvements and working with them as they turn these plans into reality.

The following are some examples of team situations Elephant Capability can help with:

If you’re wanting help to improve team functioning please get in touch.